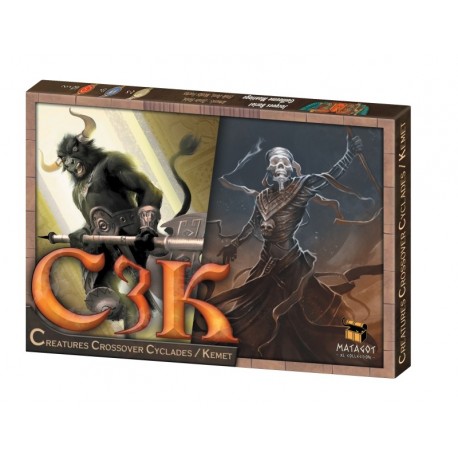 C3K, which stands for "Creatures Crossover Cyclades/Kemet", is a mini-expansion that contains seven cards for Cyclades and six power tiles for Kemet. These components allow you to use the creatures from Cyclades (and the Cyclades: Hades expansion) in Kemet and the creatures from Kemet in Cyclades.

With this expansion added to Kemet, the Greek Legends join the fight, bringing new powers to your army. Now you can make the Kraken appear in the Nile River and benefit from its strength, use Medusa's deadly stare to destroy enemy shields, and more.

With this expansion added to Cyclades, you can hire Egyptian Reinforcements, a new type of troop that comes with a special attack. Use the Mummy to raise fallen enemies into troops under your control, use the Elephant to improve your dice rolls, and more.