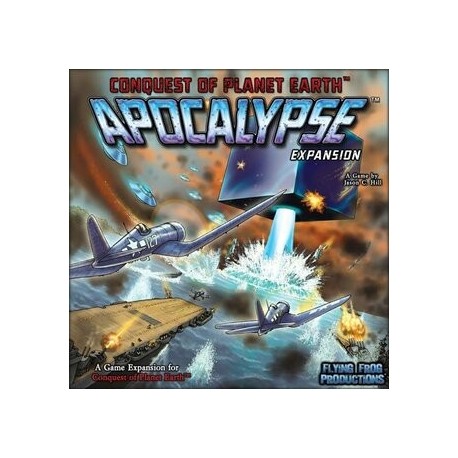 Following the initial scouting invasion of the Martian Confederation, the full Alien Armada of The Overseers has arrived. A collection of dozens of different alien races all bound by a single goal?to conquer the Earth! As this massive shadow falls across the globe, wave upon wave of saucers descend from the heavens to unleash total destruction on mankind?but humanity will not be swept away easily. Earth?s mightiest superhero Captain Fantastic leads the charge in humanity?s defense, as Flying Saucers dogfight with Jet Fighters over the skies of the capitol and heavy Army Tanks roll through the streets to defend against waves of Robotic Soldiers and Tentacled alien fiends. These primitive Humans are ripe for defeat, yet the aliens may be their own worst enemy. As old rivalries flare and ambitions ignite, these many varied alien races will do anything to gain the favor of their Overseer masters, including undermining and betraying one another to ultimately achieve the sole glory in ? the Conquest of Planet Earth!

Conquest of Planet Earth: Apocalypse, an expansion for Conquest of Planet Earth: The Space Alien Game, includes new alien races (one of them being the Martian Confederation from FFP?s Invasion from Outer Space), new allies to help those invaders, and new cards for all other decks in the base game. The expansion includes a new Coastal Resistance Deck that boosts Earth?s defense forces with naval ships, submarines, and jet fighters. Additional components allow for two additional players to join in, raising the maximum player count to six.