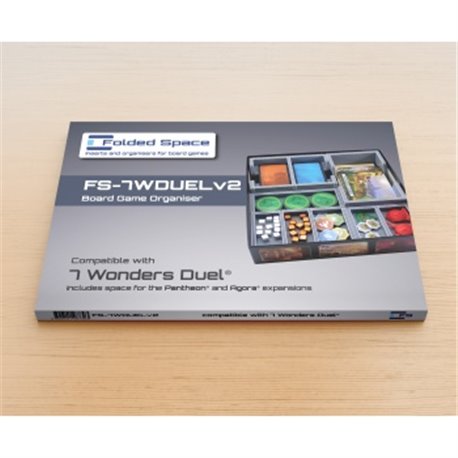 Insert compatible with 7 Wonders Duel® and the Pantheon® expansion. The design provides both efficient storage and improved game play. The trays can be utilised during the game, and they greatly aid set-up and clear-away times. The rules and boards act as a lid on top of the trays. There are two trays for storing the three age decks and the guild cards. The two larger trays are for the large cards and the score pads. the wonder and divinity cards are stored together. All cards can be sleeved. There is a tray for the coins, with separate slots for each value. The other large tray is for the pawns, the mythology and other tokens. There is a separate tray for the progress tokens, and one spare tray. The rules are placed on top of the insert trays acting as a lid. Next place the two game boards followed by the rule book from the Pantheon® expansion. This product consists of a flat-pack of 2 Evacore sheets. The trays require assembly, which is quick and fun, using ordinary PVA glue. Detailed instructions are included in the package.