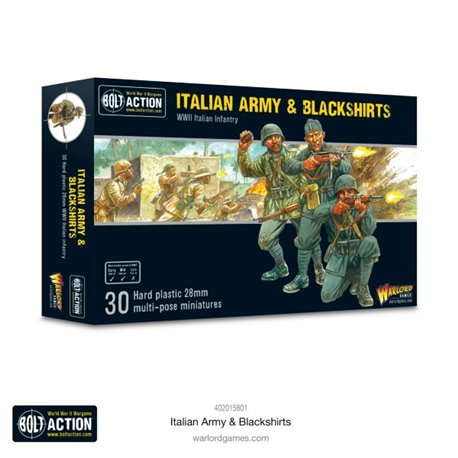 Mussolini famously boasted that the Italian army had eight million bayonets standing at the ready. In actuality, the standing Italian army was far smaller than that, with huge numbers of troops conscripted into a war they neither believed in nor understood. The fighting ability of units of the Italian army varied greatly, with much of the rank and file lacking proper equipment, transport and even motivation. Still, there were several key battles in North Africa and the Eastern Front where they performed well.

Initially, the standard rifle was the Carcano Model 1891 as used in World War I. A shortened version was introduced in 1941 (the M91/41); this along with the M38 Carbine, was intended to replace the M1891 – the shorter barrels being far more practical for the infantry to carry and manoeuvre. These latter two weapons are represented in our new plastics. Also represented is the M91/38 cavalry carbine – typically issued with a fixed rear sight (set to 200 metres) and a folding bayonet. The excellent 9mm Beretta M38 was the standard sub-machine gun. The Italian light machine gun – the Breda Model 1930 – suffered from a slow rate of fire, the same small calibre ammunition as the squad’s rifles, and a mechanism prone to jamming and breakage.

The MVSN or Milizia Volontaria per la Sicurezza Nazionale (Voluntary Militia for National Security) was made by the Fascist Party into a paramilitary organization similar in concept to the German SS. The rank and organizational terminology used by the MVSN was very close to that of ancient Rome, with legions, centuries, cohorts, maniples and so on. Mostly concerned with territorial security and counter-partisan activities, in wartime the Camicie Nere were organized into ‘assault legions’ that were fielded alongside regular army infantry divisions to reinforce them and as a way to ‘politicize’ the Regio Esercito.

The Italian uniform changed several times during the course of the war and we chose the pattern that could best represent a wide array of troops, at different times during the war, and in different theatres of operation. At 28mm scale, these are ideal to represent M37 or M40 tunics. We have also included the Camiciotto Sahariana pullover smock for added variety.

Not only that but the sprue contains masses of optional extras such as two types of gas mask bags, goggles, bayonets, combat knives, etc!